Sari Rasheed earned his master’s degree in Microbiology and Immunology from the American University of Beirut (AUB) in 2016. He investigated a research project entitled “The Effect of Micafungin and Anti-bacterial Agents on Pseudomonas aeruginosa Biofilm Formation in BALB/c Mice” which was presented both during the ASM Microbe 2017 in New Orleans-USA , and in 19th Annual Congress of the Lebanese Society for Infectious Diseases and Clinical Microbiology (LSIDCM) in Beirut.

In 2017, Sari joined the HIPS-department of Microbial Natural Products as a PhD student. His main research focuses on target identification and mode-of-action studies with novel microbial natural products. Currently, Sari is working on initiating an in vivo zebrafish model to study and characterize early-stage compounds discovered at HIPS with a focus on the tuberculosis model Mycobacterium marinum.

Expanding the knowledge around antitubercular 5-(2-aminothiazol-4-yl)isoxazole-3-carboxamides: Hit–to–lead optimization and release of a novel antitubercular chemotype via scaffold derivatization

Zebrafish: An Attractive Model to Study Staphylococcus aureus Infection and Its Use as a Drug Discovery Tool 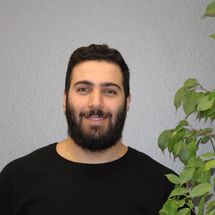